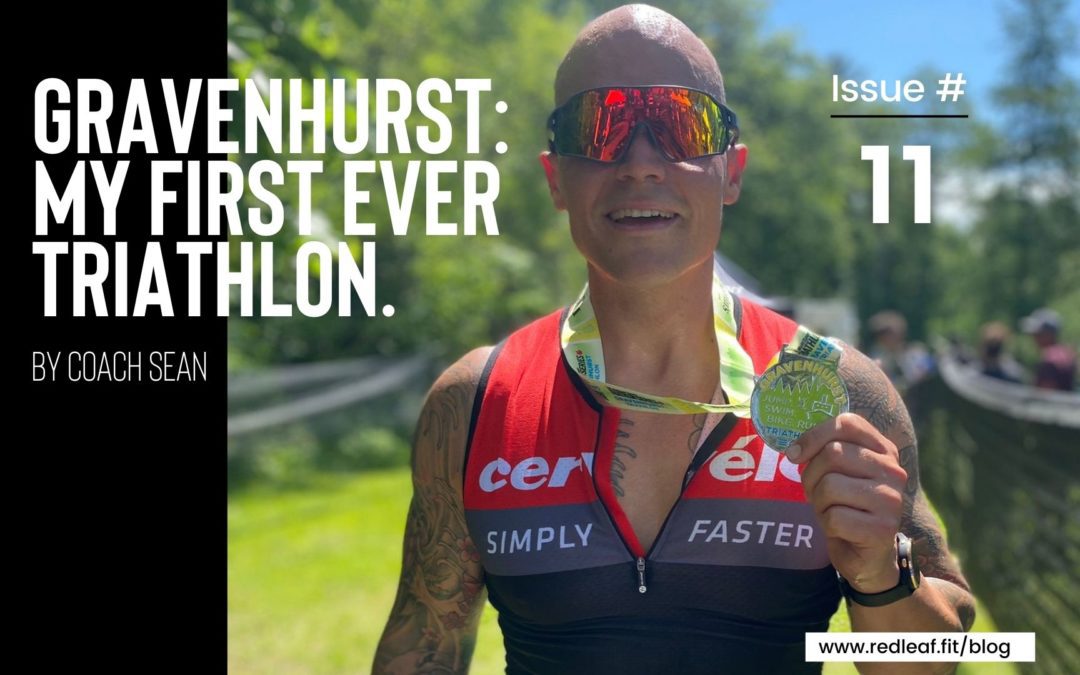 Gravenhurst: My first ever Triathlon.

I tossed and turned all night in anticipation of the day.  When I woke up I was foggy and my brain felt slow.  Coffee didn’t improve clarity, it made things feel worse, and my heart raced with nerves.  I got on the road at 4:30 am with a feeling of deep dread. I was going to be late or worse, get to the race and find out somehow had forgotten my bike or some critical piece that would devastate the day.  When driving on the highway I missed my exit to take me north and had to double back, losing some time which ratcheted up my already white-knuckle race day stress. I finally got off the highway to turn back around only to find the ramp was closed for “line painting”.  WTF I thought.  So I took city streets until I guessed at a possible ramp back onto the highway.  It worked.  But I lost about 40 minutes of drive time and I meant I had to drive fast to make it to registration and to set up my transition spot.  But…I made it with time to spare.  I worried and got really worked up for nothing.

I volunteered ahead of time to be in the “expected to finish last” wave.  We were the red caps.  And this group was jolly, cheering, and chanting and they made me feel calm and not take myself too seriously.  I was so grateful for that.  When the steamship whistle blew they loaded us onto the top deck of the Winonah II and we puttered to the “drop zone”.  Nervously we sat baking in the sun watching wave after wave of athletes jump in Lake Muskoka and wade in the water until “3-2-1 GO”.  I was sweating and overheating when the redcaps were called up, we were next. The race official on the boat would yell “one athlete LEFT, one athlete RIGHT, hold onto your goggles, jump and get out of the way!”.  My heart rate was soaring, it felt like I was a paratrooper on a mission or something, I really didn’t expect that feeling.  Reminding myself to breathe I stepped up to the ledge and lept off. I plunged into the 19°C water. It was so refreshing that it drove my confidence up.  Even though later on the swim I would have two, foot cramps.  I felt ready and prepared.  It was “go time”.   Like the waves before us, our time came and off I went.  I felt slow, steady and positive in my mind.  Everything my coach Andrew Flynn had taught me had bubbled up to the top of my mind and I focused on my training.  After making the first turn around the “green buoy” I felt a surge of focus.  I didn’t pick up my speed but did feel my body relax, and I allowed a rhythm to take over, the beat of my heart, the counting of my strokes and the dependability of sweet oxygen were all keeping me happy.  I was so present, but also “gone”.  My favourite place to be, I feel lucky to be in the “here & gone” state, but sometimes I don’t know I’m there till it passes.  I would cycle through calming thoughts of my family, and return back to my training cues from Andrew, all the while learning lessons on “sighting” as a few times I was angling way off course in my beloved little flow state.  I passed a few swimmers from waves that started ahead of me and let that have no effect.  I wasn’t about to start thinking all high of myself in the first 30 minutes of a 3-hour event.  I was making many rookie mistakes, I didn’t want another one.  Next thing I knew I was climbing up the ladder and trotting to my bike, slowly unzipping my wetsuit and trying to right my equilibrium from the horizontal of swimming to the vertical of walking.  I got to my bike to find one of the guys I was racing with was 10 minutes ahead of me on the swim.  He was a very welcomed sight because he waited for me so we could do the bike together.  He didn’t have to do that but I was so grateful he did.  Off we went, passed the cheers of onlookers, some we knew, most we didn’t.  I loved every one of them and their cheers really meant something to me.

I settled into a good pace of 28km/hour on the bike and let my legs spin.  I don’t know if it was adrenaline or I was already warmed up but I felt strong with tons of depth.  Coach Andrew told me not to eat too early on the bike so I waited until about 5K in and started to slowly drink three bottles of my race mix which consisted of EAAs, Carbs, and Electrolytes.  Each refreshing gulp just hit the blood like rocket fuel.  Considering how much of lake Muskoka I drank on the swim with wakes to the face, I was quite thirsty.  My race partner and I rounded the halfway point and picked up our pace.  Our legs were burning from the hills but the feeling of being “halfway” is incredibly motivating.  We passed about 50 riders and again, I reminded myself, not to let that mean anything at all.  Who am I kidding? This is my first triathlon, perhaps it means I’ve lit too many matches on the bike. (Lighting matches is a term in endurance sports that means you only have so many matches to light, when they’re gone, they’re gone- use them wisely.)  When we returned to the transition area to run I was surprised at how ready I was for the run.   Scared, my heart rate was soaring, it was getting later in the day so it was hot but I wanted to hurt more.  I was hungry for it.  I stuffed two gels into my jersey not knowing if I’ll need them but better to be safe than sorry.  I drank too much water which I paid for later.

“LFG” I thought as we took off.  About 400m into the run I noticed I was holding a 4:40km pace, way too fast, way too fast, so I settled it back to a 5:45km pace, which felt like walking compared to our speeds on the bike.  The first KM felt like a marathon.  My legs were bricks and my hips didn’t like this at all but slowly, very slowly I settled into a pocket where things felt “okay”.  First came the bees, then the horse flies, then hills.  Then all three of those elements stayed for nearly all 10KM.  I drank so much water before the run that my stomach was bloated and hurting.  What I was thinking, consuming all that water?  That was a thought I kept trying to forget.  Beating myself up for something over and over was not helping so I just ignored it, other things hurt more so I focused on those.  A few water stations popped up here and there which I ran through, grabbed the half-filled cups of water and immediately poured them over my head.  Runners were passing me which I made sure to block out of my mind.  I’m easily baited into competing in that scenario of “the chase”.  Ignore them, it’s you vs you today.  You’ll have your day sometime I thought.  At the 6km mark, I threw another half-filled water cup over my head and pissed off a bee that was sitting on my back. I soon felt a sharp sting on my right shoulder blade. I was so caught off guard that I swung my left hand over my shoulder and killed it with the wrath of Thor’s Hammer.  I felt it crumble in my fingertips for a brief moment before it fell away.  You’ve got to be kidding me I thought.  I probably had the equivalent adrenaline dose of an epinephrine pen surging through my body already, so if I had a secret bee allergy, I wasn’t going to learn about it today.  It didn’t hurt then and it doesn’t hurt now as I write this.  Maybe it was just a fly bite- a bee sting makes for a better story.  I passed the 7km sign and thought “okay man you can hurt more, you’ve had harder training sessions than this, LFG”.  I passed a few runners and regained some ground, I was competing now, and absolutely crushed kilometre 7.  With my heart rate at 177 and my lungs wheezing a little I closed out this segment only to be at the foot of the 8km sign and a big fucking hill.  I thought okay man, you said it was “go time” so prove it. I leaned into this hill and as I crested over the top I blocked every single pain feedback loop I could and drove out the demons in my mind that encircled my ever-shrinking flame of positive self-talk.  Slowly and surely, I worked through the final distance faster and faster.  I was running on the thought of my family and relief I was almost out of this bee hive.  The black tarmac of the Muskoka back road was hot and reflected the sun.  I was overheating, but I passed more and more runners and locked in on two more people ahead of me and played a mental game of beating them and passing the finish line.  So I did.  I passed them and made it.

I ran across the finish line hard into a crowd of cheering people and felt like a Triathlete.  I felt I earned something.  Not like an elite athletic achievement though.  It was more like I felt I earned self-respect …from my future self.  It was a quieting feeling.  I felt like I earned the right to KEEP GOING.